Hi, so LOTR is my all time favorite book/movie series and I've been thinking of getting a tattoo that also includes some sort of LOTR component. So I was thinking of getting the phrase "this too shall pass" or even "all shall fade" in Elvish (with Elvish characters) as this phrase resonates a lot with me. It doesn't have to be an exact translation but something that comes out to the same meaning. However, I don't speak any form of Elvish and have no idea how to actually translate this phrase. Can anyone here help me get it translated (and have it written in actual Elvish characters)? 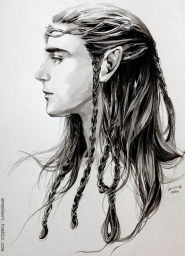 Both of these phrases are doable in both Sindarin and Quenya, I think. Which language are you interested in?

Thank you for the response! I was thinking of Quenya- but I am honestly not too sure what the exact difference between the two is.

Going to copy Elaran's answer from the Discord server here:

Quenya is the language of the Elves of the Blessed Realm, and it was brought to Middle-earth by the exiled Ñoldor. After its ban in the First Age, Quenya became a language of lore that was used for solemn ceremonies and spoken by few. It has the greatest amount of published linguistic material of all Tolkienian languages, despite the fact that the books present Sindarin as the common speech of the Elves and educated Men.

Sindarin is the language of the Elves of Beleriand, whose speech was greatly affected by the changefulness of Middle-earth while its ancestor Telerin mostly endured in the Blessed Realm. After its adoption by the Ñoldorin Elves and the Edain, it became the most spoken language in Middle-earth. However, Sindarin is only the second most developed Tolkienian language following Quenya.

Thank you so much for that explanation. Yes I think reading over it and doing my own research, I’d like to get the phrase in Quenya.

Great! Here are my takes, options separated by slashes:

Thank you! I really appreciate this :)